Given the high divorce rate in many countries, do you ever wonder if the wedding vows actually signify any real obligation to the marrying couple? And if they do, why is it that these promises are so casually ignored rather than performed?

A vow is an oath which formalizes a transaction between God and man. Vows are not commanded, by God. In fact, He frequently counsels against them; but once they are made, they are binding. (Deut. 23:21-23; Eccl. 5:4)  Most couples marrying in the United States repeat vows similar to these:

The vows above are the very ones I made when I married my husband, Steve, except mine also included a promise to obey my husband. Sadly, I have not kept those promises with consistency - particularly “to love” at all times and certainly that little part about obedience. It was a temptation for me to obscure my failures here with language like, “I haven’t kept my vows perfectly,” but since just one failure in the fulfillment equals a broken vow, I must confess that my mine have not been fulfilled as I promised on that November evening in 1970. And true to the “reap-what-you-sow” principle, though forgiven by God and my husband, I have reaped on my failures.

If this “reaping” was limited to simple guilt and a few ancillary consequences, a compromised marriage vow might not be that consequential. Yet, the Lord views our vows with great seriousness and does not dismiss them just because we somehow don’t manage to fulfill them. It is for this reason that we need to view our pledges with much greater respect and gravity than we do.

I’d like to take you on a little side trip through the Bible to explore God’s perspective on vows and to define them more clearly. Interestingly, the Bible indicates that there are five significant requirements for a vow made before the Lord.

1. & 2. A vow must be made voluntarily and verbally.
Deut. 23:23
You shall be careful to perform what goes out from your lips, just as you have voluntarily vowed to the LORD your God, what you have promised.

3. A vow must be performed.
Numbers 30:1-2
Then Moses spoke to the heads of the tribes of the sons of Israel, saying, “This is the word which the LORD has commanded. If a man makes a vow to the LORD, or takes an oath to bind himself with a binding obligation, he shall not violate his word; he shall do according to all that proceeds out of his mouth."
Ecclesiastes 5:4-5
When you make a vow to God, do not be late in paying it; for He takes no delight in fools. Pay what you vow! It is better that you should not vow than that you should vow and not pay.
Matthew 5:33
“Again, you have heard that the ancients were told, ‘ YOU SHALL NOT MAKE FALSE VOWS, BUT SHALL FULFILL YOUR VOWS TO THE LORD.’

4. A vow must be performed without delay.
Deuteronomy 23:21
When you make a vow to the LORD your God, you shall not delay to pay it, for it would be sin in you, and the LORD your God will surely require it of you.

5. “Perfect” fulfillment is required in fulfilling a vow.
Leviticus 22:23
In respect to an ox or a lamb which has an imperfect or stunted limb, you may present it for a freewill offering, but for a vow it will not be accepted.
Malachi 1:14
But cursed be the swindler who has a male in his flock and vows it, but sacrifices a blemished animal to the Lord, "For I am a great King,” says the LORD of hosts, “and My name is feared among the nations.”

In the spirit of personal transparency, I will disclose my marriage vow scores to you:
1. Voluntary?  A+
2. Oral?  A+
3. Performed faithfully?  C (Mediocre performance.)
4. Performed promptly?  F (If one day is as 1,000 years in the sight of the Lord, I’m tardy.)
5. Performed perfectly?  F (Epic fail.)
It’s obvious that I must plead the blood of Jesus, to whom I am profoundly thankful.

Now, let’s examine two particularly interesting scriptures that are specific to vows that may be undertaken by a woman or a girl.

On the evening I married, just before entering the church to repeat my marriage vows before God and witnesses, my father did something surprising. He leaned over and said quietly, “If you have any doubts, just say the word and we can leave together right now. My car is just outside.” (Below is a picture of us taken just after that very moment over 40 years ago.) He loved and respected my Steve, but he was ready to protect me from any ill-considered pledge I may have made. Unbeknownst to him (since he wasn't a believer at the time), he was being an excellent and Biblical father when he made this comment. Notice the provision the Lord has made for the vows of a daughter:

NUMBERS 30:3-5
“Also if a woman makes a vow to the LORD, and binds herself by an obligation in her father’s house in her youth, 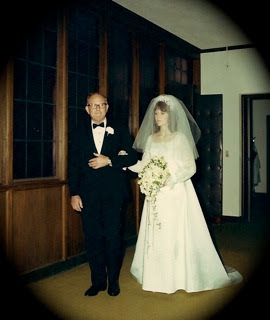 The verses above reflect a practical, caring Father-God. Within them, He provides needed oversight and guidance to the inexperienced young female deriving from a source that will be naturally protective, caring, and more mature - her own father. But, let’s read on.

These verses describe various situations wherein a woman’s husband is to now function in the same protecting role as her father concerning any vows taken by his wife. It is interesting to note that scripture knows no point in a woman’s life wherein is she to be without the protection and guidance of a male-guardian.

I understand that the nature of this type of male oversight might rankle the autonomous spirit of modern woman (including that of many Christian women) because of its paternalistic overtones; but from Sarah calling Abraham her lord in an acknowledgment of his authority over her life, to Ruth covering her feet with Boaz’ cloak in a symbolic gesture of her desire for his protection, to the material support given by the elders to the enrolled widows of the church, the Bible demonstrates the manner in which God has taken pains to make protective provision for His daughters. It is clear that the Lord wants fathers and husbands to use responsible wisdom in the oversight and care of their women. It is, therefore, their solemn duty to monitor the wisdom of their wive's and daughter's vows as part of a general system of provision and protection which the Lord has ordained for the benefit of women.
at December 06, 2011